7 Most Popular Programming Languages in 2021 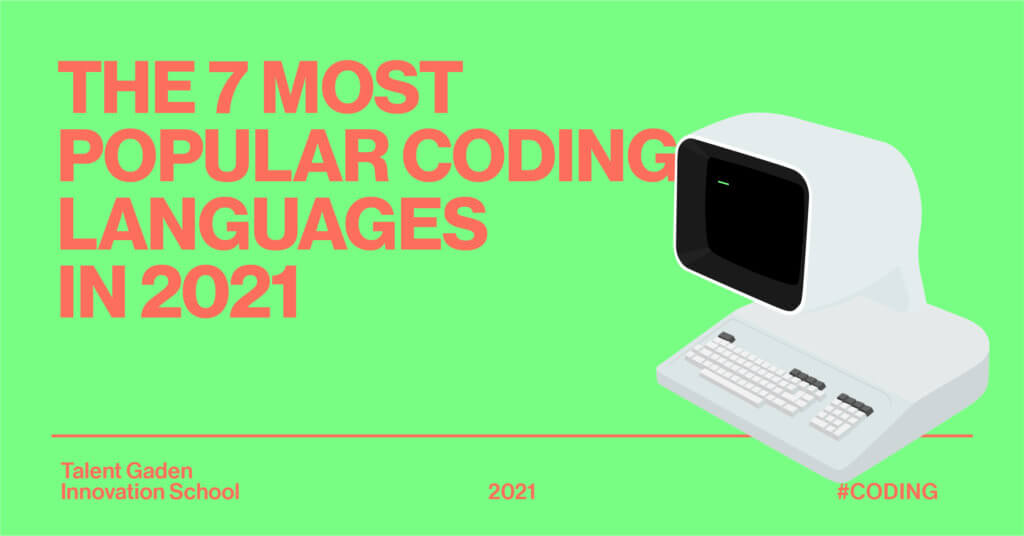 As the technology ecosystem evolves the same happens for what lies at the core of each computer program, application, device or system, namely programming languages. As new demands emerge, new programming languages designed for or that specifically fit those demands also come to the fore. There are various programming language rankings (PYPL, TIOBE, Stackoverflow, etc) that are updated every year and that take into account many factors, including diffusion, easiness, generality vs specificity, and last but not least how useful a certain programming language is to get a job or a salary increase! And the tops of the pops for the year 2021 are…

Javascript is one of the most popular programming languages among developers and has been for many years, thanks to its wide range of applications, its flexibility, and its capability of adding responsive elements to web pages. Javascript is surely an essential asset of the know-how of any coder, now and for the years to come. If you feel you’re not as proficient in Javascript as you should be for your career’s sake, you can enrol at the Codemaster Online Bootcamp, a crash course that will bring you from 0 to javascript master in just 12 weeks! All the tech giants (Facebook, Google, Microsoft, etc) use javascript for their apps, and so do millions of websites around the world. So if you are choosing a language to study in 2021, this is the one!

The widespread diffusion of Python, which is undoubtedly one of the languages most used, is due to its ease. Python isn’t a complex, complicated language. On the contrary it’s quite easy to learn. Its flexibility means you can do almost anything and you have an enormous number of libraries that come with it. Another factor to take into account is that Python can be successfully used for trending technologies like artificial intelligence, machine learning and data analysis. And of course, it can be found everywhere: more than 80% of all the websites are built using Python. Developers, do add Python to your CV!

C and C++ may be old but they are by no means outdated! They are still used in many companies and systems (C ranks number 1 in the 2021 Tiobe index, and C++ number 4). One of the major advantages of learning them is that many other programming languages are based on or inspired by C and/or C++. So if you learn them it’s really easier to learn other languages as well. In comparison to other programming languages both C and C++ are low level languages and so closer to hardware and particularly good at programming hardware resources. But they can also be used for games development, GUI, operating systems…they really are languages for all seasons (and uses).

Another great classic! Java is used by around 8 million developers across the world and thanks to its approach “Write Once Run Everywhere” (i.e. its code does not need to be recompiled, it can be used on all platforms that support Java) it is really widely used. If we must embark on a language comparison we could say that Java is surely one of the most successful languages of all time! Being so popular means it also has a huge community in support as well as a truly rich library. On both TIOBE and PYPL charts it is quite high in rank. Becoming a Java master will surely help you in your career!

R can be considered a specialist language. It may be used as a general purpose one but it’s especially good at numerical and statistical analysis. As such it has great success in machine learning and data science fields, which are emerging at the moment. So we can expect huge growth in popularity for this coding language. R is also good for people who don’t want to be a coder but do want to perform numerical analysis. So it can be used by scientists, engineers, statisticians, finance gurus etc.. Plus its open source so you don’t have to pay to use it.

Kotlin is THE programming language for android developers (in 2017 Google declared Kotlin as the official Android language, alongside Java). Kotlin is a general purpose, open source, multi platform language that is 100% interoperable with the Java programming language and is used by 60% of the android professional developers. It can also be used for web development and desktop applications. As a plus, there is a growing thriving community out there, ready to give you support and to help you solve any problem you may have.

Similar to how Kotlin is a language for Android apps, Swift has been developed specifically for iOS. As the name suggests, Swift is known to be really easy and fast, much faster than python for example in developing Apple apps. And if you want to learn it, Apple has developed the “Swift playground”, an app that helps you have your way through the fundamentals of Swift while having fun too.