A year of conversations on Twitter from artificial intelligence to startups

We are proud to present our extensive analysis of what innovation stands for today and how it evolved during the past year. After studying the conversation peaks on specific themes on a regional and European level we identified the most relevant areas of discussion and topics associated with the word innovation. We discovered the places that are leading Europe in the debate on innovation and technologies that are changing the world, by analyzing tweets containing #innovation in different languages from 28 European countries.

Twitter has always been the social media platform that, more than others, is able to capture discussion trends. There were about 850 thousand innovation-themed tweets analysed, shared by over 160 thousand unique users, 64% of tweets posted by men and 36% by women.

60% of the European debate took place mainly between the United Kingdom, France and Italy, demonstrating greater attention to the theme of innovation.

At # 1 of the top ten of the most common hashtags is #AI; 2nd appears #startup followed in 3rd place by #IoT. In 4th place #bigdata, followed by #digitaltransformation, #blockchain, #fintech, #digital, #machinelearning and #artificialintelligence.

From an advanced analysis of the content, it emerges that the key topics that have catalyzed the discussions in the 28 European countries, and that will be the driving force in 2019, were: AI (Artificial Intelligence, Deep Learning, Chatbots and Robots), IoT (Internet of Things, Industrial Internet of Things and Internet of Everything), Blockchain and Cryptocurrency.

After doing a complete overview of European trends the Innovation Report 2018 does a deep dive into the emerging tech countries where Talent Garden lives.

The most discussed topics in Italy surrounding innovations was the blockchain and how it supports the “Made in Italy” system. Italy has recently entered the European Blockchain Partnership together with 26 other European countries. Also, the industry 4.0 is a hot topic with robotics, predictive analytics, IOT, and big data being some of the technological building bricks behind the intelligent factory. And Fintech and Open Innovation were key for the discussion around Digital transformation that will revolutionise the Italian financial ecosystem.

From this advanced analysis of the most discussed content, key threads that have catalysed the conversations in Denmark are Cybersecurity and Information Security, Entrepreneurs and Intrapreneurs, and the Startup Awards. In particular, we found that Copenhagen’s tech startup community is booming, and you can tell with 90% of tweets coming from this city. Copenhagen every year is becoming a more central part of the tech evolution holding events like the two-day festival in Øksnehallen called TechBBQ, that in 2018 attracted 150 startups, 6000 delegates and international businesses like Microsoft, Siemens, Gooogle, and Tesla.

We analyzed 12.587 tweets about innovation that were posted in the last year from 4.056 unique Irish users and found that this year Ireland has entered the race for bringing innovative ideas to life with a big conversation thread collecting around the Government offering €500m Disruptive Technologies Innovation Fund (DTIF) to Irish innovators. And other key topics revolved around the news of the Innovation District from Trinity College Dublin and the  Intel artificial intelligence and computer vision incubator programme collaborating with DCU Alpha.

In Austria, we found the most gender-balanced country when it comes to innovation with 45% of tweets coming from women. The issues discussed came mainly from Vienna with the “Informal Meeting of Competitiveness Ministers,” that had in-depth exchanges on reinforced industrial strategy for the EU focusing on areas like digitalisation, robotics, AI and professional education. Also, fundamental topics that gained traction last year were banking, fintech, machine learning, and data protection with the European Union’s General Data Protection Regulations (GDPR) mandates.

“Talent Garden Innovation Report” is an annual study of Twitter conversations at a European level, to understand the most commonly discussed issues that are related to the English word “innovation” or the different translations of this word in all of the European Union languages. 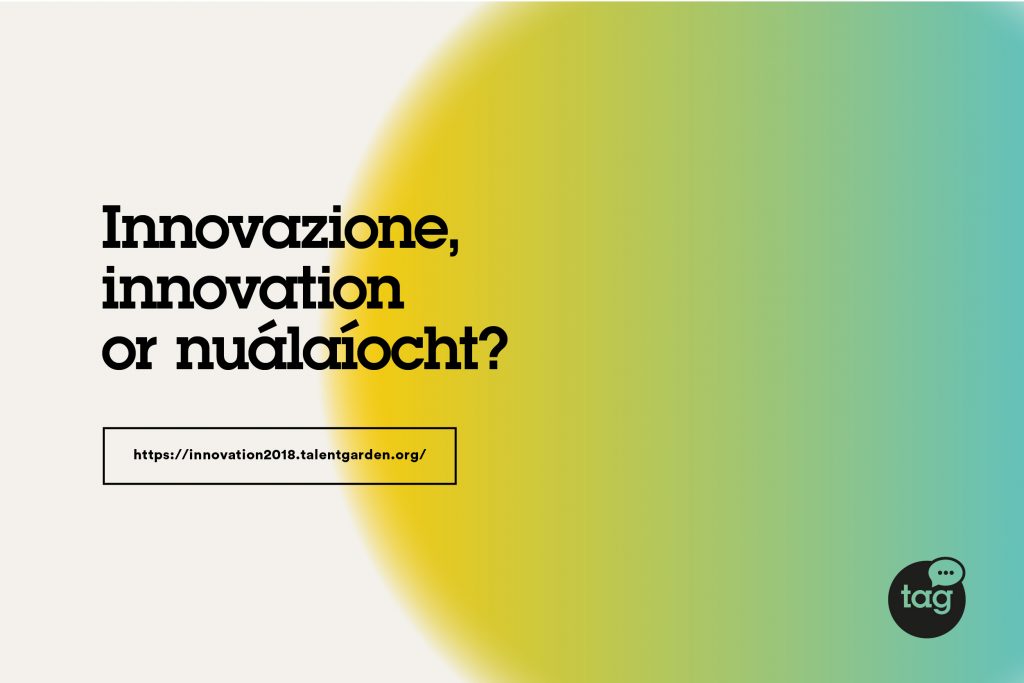 *Analysis of Twitter conversations for the year 2018 (1 January – 15 December), on selected keywords. The keywords identified includes the word “innovation” and its translations in the different EU languages: Italian, German for Austria, English for Ireland, Danish.