How to grow your business with Growth Hacking | thelabmilano case study

Today at Talent Garden Calabiana Milano, we interview Growth Hacker Armin ZadakBar, founder and CEO of The Armin Bar, a company specialized in Digital Business Transformation and Growth Hacking in between the US and Italy. We asked Armin all about thelabmilano, the unconventional burger restaurant that increased their revenue by 300% in just four months, and is now the 1° ranking restaurant in Milan on TripAdvisor.

T: Hi Armin, how did this adventure start?

A: Let’s start from the timeline:

T: How did you do this? Tell us the story.

A: Well, here’s the story. In March 2018, I found a hidden gem by my house in Milan. It was a newly opened, cozy burger joint that was making AMAZING burgers, with over-the-top customer service, but it was almost always empty. The marketer in me couldn’t resist getting involved, so I started giving their team some suggestions and they started seeing immediate results. After a few months, they asked me to officially join their team and help them. I immediately made a deal to become a partner, despite the fact that it wasn’t in line with our clientele at The Armin Bar (NYC|Milan).

So, we got to work. The first thing we did was set up a photoshoot. (S/O to Alessandro Best). We knew we needed to showcase the product so that we could start building their audience. Once we had the pictures, we started rebuilding the Facebook and Instagram page from scratch @thelabmilano. From there, we made a very small investment in marketing (approximately €30) and used it to promote the new posts to have and study engagement of our posts. This small investment made a huge difference. For example, we increased the following by 122% and increased website clicks by 600% on instagram. We then started asking the customers how they find and how they choose a new place to eat. The majority of them answered TripAdvisor.

The challenge was now clear. Potential customers want to see that a restaurant is rated well by TripAdvisor. So, we had to figure out how to make a strong presence there!

I always say, “It’s about what your customer wants to hear, not what YOU are excited to talk about.”

Naturally, we start asking customers to leave reviews on TripAdvisor and after two weeks I noticed two very interesting points:

2- Having reviews in different languages helps the ranking.

Then we faced a new challenge! How to have people with a lot of reviews to review our restaurants? 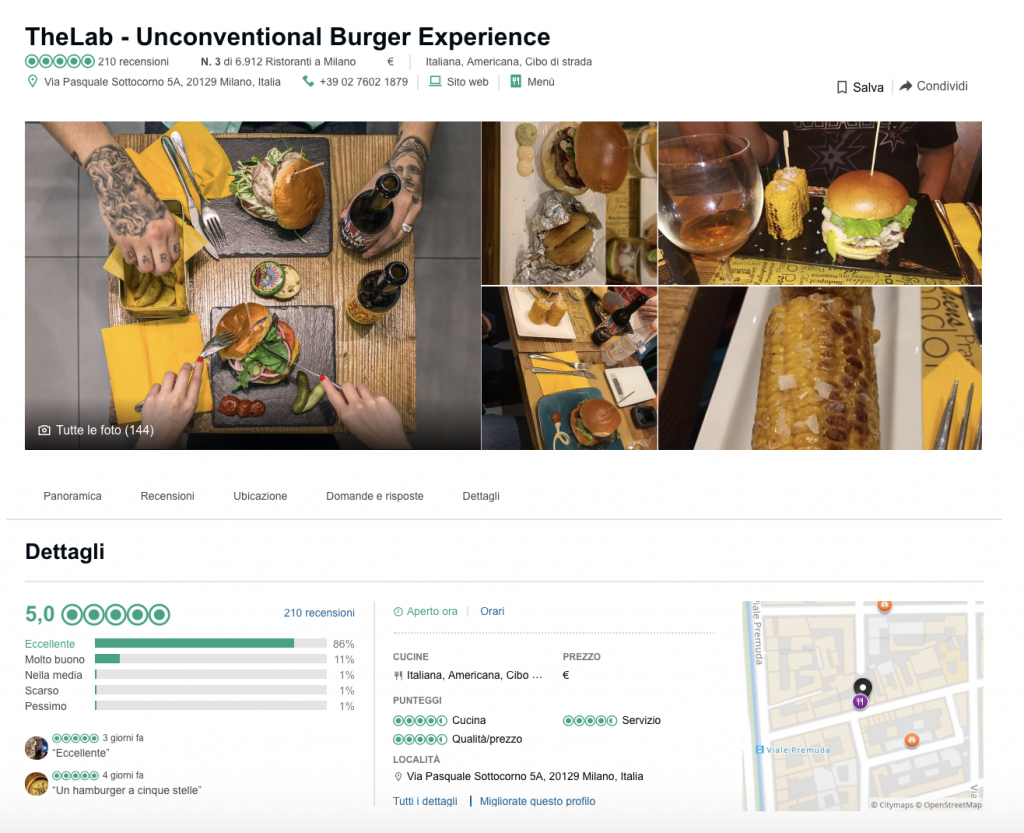 We reached out (via in-app direct message) to local influencers on TripAdvisor, people who had more than 500 reviews on TripAdvisor. We showed our appreciation to them for being active members of the community and invited them to have a full experience meal on us, in exchange for their honest review (even if the review was not positive). They came, they ate, they loved it, and eventually we received some great reviews from these influencers. From there, we saw our ranking increases on TripAdvisor and new customers start to come through the doors. On August 8, 2018 we reached #1 ranking of all 6913 restaurants in Milan on TripAdvisor and we are on the top ever since. We also saw a number of international customers coming in and loving the place. We asked everyone to leave reviews on Google and TripAdvisor in their own language to try to raise our visibility on those platforms. These reviews resulted in massive, fast growth in the business. Our revenue rose by 62.5% in two month and by 300% in only four months!